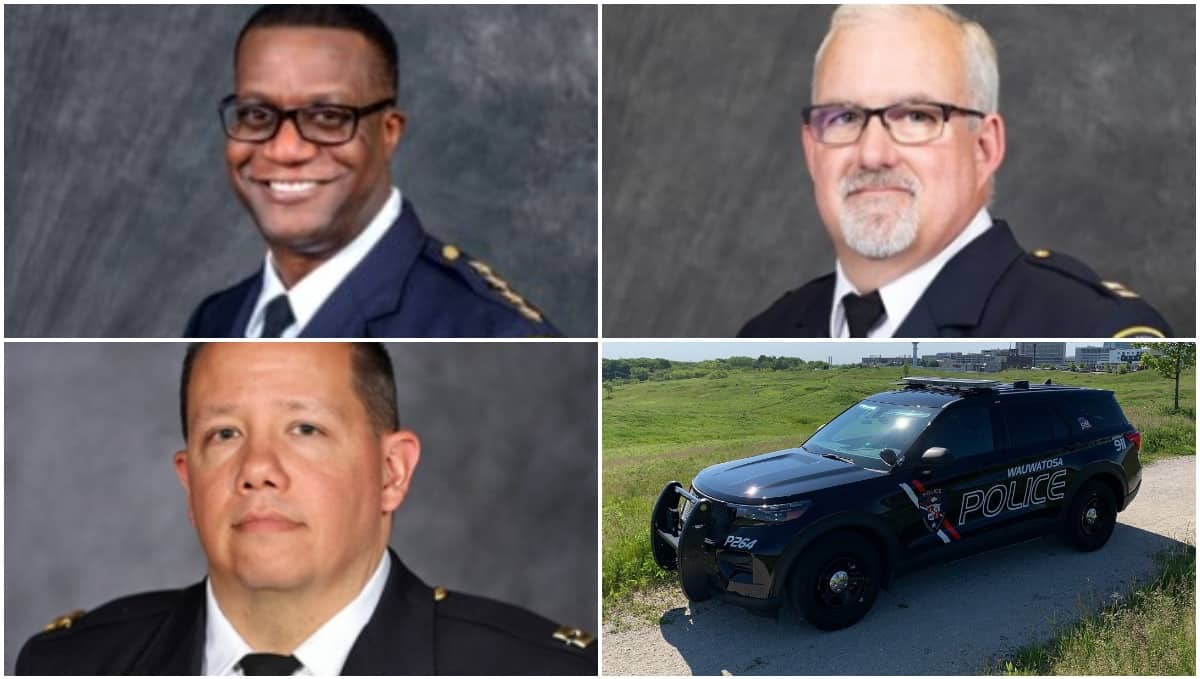 There will be a new Wauwatosa police chief announced on Thursday, July 1, 2021. The City of Wauwatosa Police and Fire Commission will take a vote at 4:30 p.m. today.

Update – It was announced, on a 4-1 vote, that James MacGillis will be the new Wauwatosa chief. Read our updated story here.

All three finalists are current or retired Milwaukee Police Department commanders. One, Jeffrey Norman, is currently the acting MPD chief, but his future in that post is uncertain as the city continues to delay in coming to a decision on the Alfonso Morales mess. Morales is scheduled to resume his job as Milwaukee police chief on July 3, per a judge’s order, if the city doesn’t reach a settlement with him.

All three finalists for Wauwatosa police chief are long-time commanders with the MPD: James MacGillis, Jeffrey Norman, and David Salazar. At the same exact time, the Milwaukee Fire and Police Commission is meeting to hear an update on Morales.

According to the city’s meeting agenda:

The following commands can be entered using your phone’s dial pad while in a Zoom meeting: *6 -Toggle mute/unmute *9 -Raise hand

Members of the public may also monitor the meeting as it is being conducted by visiting the City’s website at www.wauwatosa.net and locating the meeting portal link under the Government tab. Once there, click on the live stream link to watch the video. This link will be available approximately 5 minutes prior to the meeting starting. There are no login credentials needed.”

Here are the finalists’ bios. Who do you prefer? Tell us in the comments.

Wauwatosa released this bio for MacGillis. He is a retired MPD commander who is currently in a leadership position for a major drug crime initiative called HIDTA.

“James H. MacGillis is the current Drug Intelligence Officer-North Central HIDTA for the state of Wisconsin as part of the national Overdose Response Strategy spearheaded by the Office of National Drug Control Policy (ONDCP). He retired in January 2021 as a Captain of Police and the Director of Training at the Milwaukee Police Academy where he managed and supervised police recruit training, in-service training, and specialized training for the Milwaukee Police Department after 25+ years of service. He has testified several times as a use of force expert and training expert in the areas of officer-involved shootings, the training and delivery of verbalization skills with physical use of force, and in custody death prevention. He has previously worked in patrol, investigations, training, HIDTA (enforcement), and communications. James has managed many projects related to use of force, narcotics safety and evidence processing, and he consults at a state, national and international level regarding tactics and use of force best practices (Washington D.C, Shanghai, China, and EMS World Conferences). He is also a co-consultant and co-author of several training manuals that are the state standard for using force and tactics in the state of Wisconsin as a member of the Wisconsin Law Enforcement Standards Board-Tactical Skills Advisory Committee (2005-2021, 2021-emeritus member). He holds certifications as a Master Firearms and Master Tactical Response instructor along with several other law enforcement training certifications.

James is an emeritus Law Enforcement Advancing Data and Science (LEADS) research scholar with the National Institute of Justice and has consulted on several research projects with RAND Corp, George Mason University, the Police Executive Research Forum (PERF), National Law Enforcement Firearms Instructors Association (NLFEIA), International Association of Directors of Law Enforcement Standards and Training (IADLEST), and IACP (International Association of Chiefs of Police). He holds a master’s degree in Administrative Leadership from the University of Wisconsin-Milwaukee focusing on adult education programs. He is also a WI-DOJ Command College graduate and Certified Public Manager through UW-Madison. He has also served in the US Army (active and National Guard) as a combat medical specialist and was the Military Liaison Officer for the Milwaukee Police Department, assisting separating and returning service members and their families during deployments. Prior to his military service, James grew up in Wauwatosa, having attended Washington and Underwood Elementary Schools, Whitman Middle School, and graduated from Wauwatosa West High School.

Norman is the acting Milwaukee police chief. Wauwatosa released this bio for him:

“Jeffrey Norman is the current Acting Chief for the City of Milwaukee. Jeff was appointed to the Milwaukee Police Department in 1996. As an officer, Acting Chief Norman served in District 1, District 2, and the Technical Communications Division until his promotion to detective in 2002. As a detective, he served in the Robbery Division, Violent Crimes Division and Homicide Division until his promotion to lieutenant in 2010. As a lieutenant, he served in the Property Crimes Division, Metropolitan Division (Robbery Task Force, Homicide Unit and Cold Case Unit) and District 5 as the dayshift commander. Promoted to captain in 2017, he commanded the Inspections Division and District 3. In 2020 he was promoted to Assistant Chief.

On December 23, 2020, he was appointed to serve as the Acting Chief of the Milwaukee Police Department.

Acting Chief Norman holds a Bachelor of Science degree in Criminal Justice from the University of Wisconsin-Milwaukee, a Masters of Public Administration degree from Kaplan University, and a Juris Doctor degree from Marquette University Law School. Acting Chief Norman is a graduate of the FBI LEEDA’s Executive and Command Institutes, Southern Police Institute’s Chief Executive Leadership, International Associations of Chiefs of Police’s Leadership in Police Organizations and 68th Session of the Police Executive Research Forum-Senior Management Institute for Police (SMIP) in Boston, MA.”

Wauwatosa released this bio for Salazar.

“Captain Salazar was appointed to the Milwaukee Police Department in 1996 and served as a patrol officer in the Seventh District until his promotion to Detective in 2001. As a Detective he worked in the Robbery Division and later in the Homicide Division. From 2009 through 2013, he served as a Lieutenant in the Criminal Investigation Bureau and in the Internal Affairs Division.

Buy us a beer!