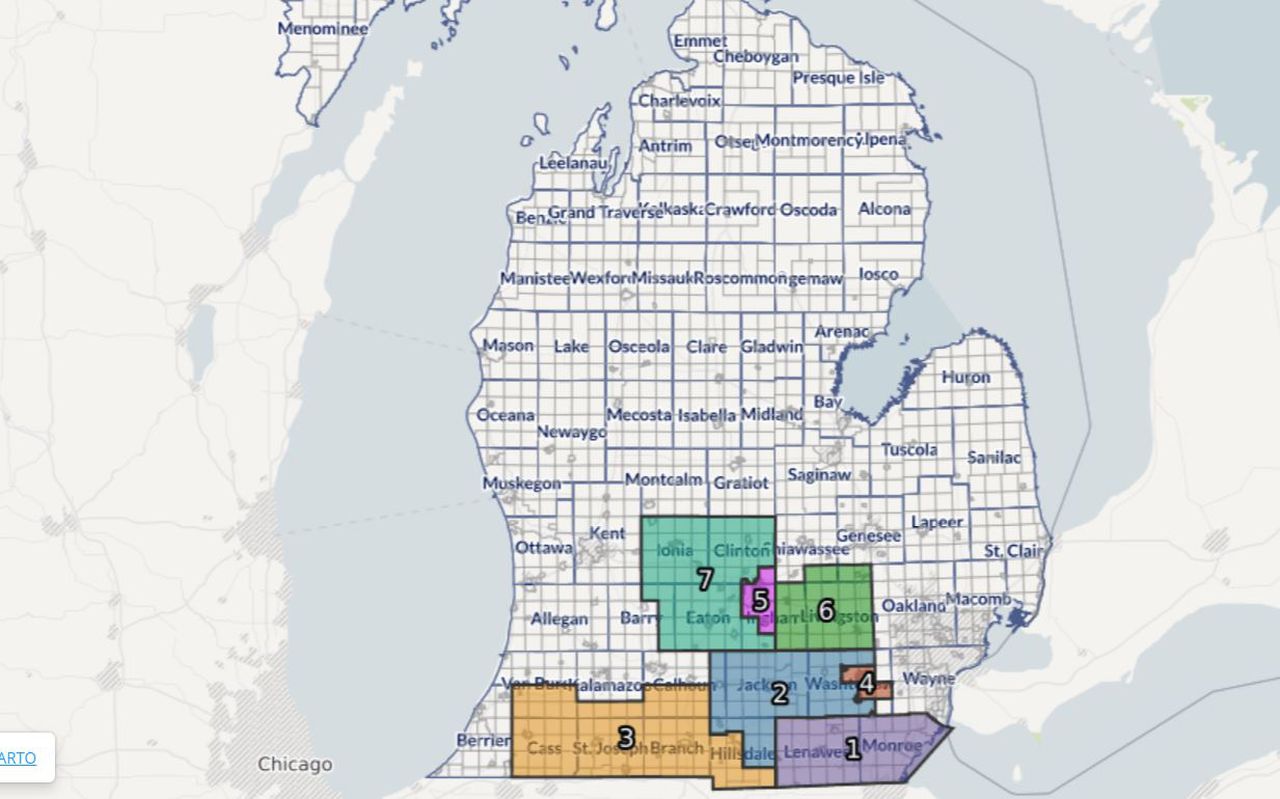 LANSING, MI — All eyes were on the Michigan Independent Citizens Redistricting Commission this week as it began its first drafts of preliminary political map-drawing.

Maps at this stage could later be changed due to other factors outside of population, including communities of interest, racial polarization data and federal Voting Rights Act requirements.

As drafts of state House and Senate districts in South and Central Michigan take shape questions have been raised about commissioner absences, including the chair of the commission, who has missed all three of the map drafting sessions the commission has held so far.

Keep reading for more from the week in Michigan politics:

A total of nine attorneys who represented Republican voters in what’s been deemed a “frivolous” lawsuit alleging fraud in Michigan during the 2020 presidential election were sanctioned in a court opinion issued Wednesday.

“This lawsuit represents a historic and profound abuse of the judicial process,” U.S. District Judge Linda Parker wrote in a 110-page opinion announcing the sanctions. “It is one thing to take on the charge of vindicating rights associated with an allegedly fraudulent election. It is another to take on the charge of deceiving a federal court and the American people into believing that rights were infringed, without regard to whether any laws or rights were in fact violated.

“This is what happened here.”

The attorneys collectively have been ordered to pay attorneys fees for attorneys representing the defendants in the lawsuit, including Michigan Gov. Gretchen Whitmer, Secretary of State Jocelyn Benson, the Michigan Board of Canvassers and the city of Detroit. The lawyers must also complete 12 hours of continuing legal education on pleadings related to pleading standards and election law and Parker’s ruling will be referred to their respective state bars for possible disbarment.

One of the most publicly recognized attorneys facing sanctions is former Donald Trump attorney Sidney Powell, who vowed to overturn the 2020 election results through a national movement she and other conspiracy theorists referred to as releasing “the Kraken.”

“I’m pleased to see that the Court has ensured there is accountability for the attorneys who perpetuated meritless arguments in court,” said Michigan AG Dana Nessel, who began calling for sanctions when the case was voluntarily dismissed by the plaintiffs in January.

“It has remained abundantly clear from the outset that this lawsuit aimed to do nothing more than undermine our democratic process. I appreciated Judge Parker’s thoroughness in the hearing last month, and I appreciate the unmistakable message she sends with this ruling — those who vow to uphold the Constitution must answer for abandoning that oath,” she said.

The first drafts of state House and Senate districts in South and Central Michigan are taking shape as the state’s independent redistricting commission nears completion of its first week of map-drawing.

So far, the Michigan Independent Citizens Redistricting Commission has laid down preliminary lines based primarily on equal population, and will later reassess for other factors, including communities of interest, racial polarization data and federal Voting Rights Act requirements.

The commission’s next hearing will take place Thursday in Traverse City, where commissioners will start tackling state Senate districts in Northern Michigan.

A draft Senate map put together by the full commission would group Jackson County in with much of western Washtenaw County and a portion of Hillsdale County. Lenawee and Monroe counties would make up its own seat, while another seat would include all of St. Joseph, Cass and Branch and portions of three other nearby counties. Each Senate district needs to have roughly 265,193 people.

Under the draft plan, Ann Arbor and Ypsilanti would be grouped together into a district, and another district would incorporate most of the Lansing metro area. Another district would include Eaton and Ionia counties and portions of Clinton, Barry and Ingham counties, and another would combine Livingston County with a portion of Ingham, Genesee and Shiawassee counties.

On Monday, the commission divvied up Hillsdale, Branch, Lenawee and Monroe counties into four districts and drew another five districts incorporating portions of Washtenaw, Jackson and Livingston counties.

All of the maps at this stage are preliminary and could be changed at any time.

As Michigan’s redistricting deadline looms, chair of commission has missed 10 of last 14 meetings

As of Tuesday, the chair of the independent commission tasked with drawing Michigan’s next political maps had been absent for 10 of the last 14 meetings and had missed all three of the map drafting sessions the commission has held so far.

Detroit resident Brittni Kellom, the commission’s chair and one of four Democrats serving on the 13-member panel, had attended three meetings in person and one virtually since the commission transitioned from soliciting public comment to the process of analyzing data and drafting maps in early July.

Meeting minutes and video recordings of each commission meeting since July 8 show Kellom was present at the commission’s July 15, July 23, Aug. 5 and Aug. 6 meetings. Between July 8 and Aug. 24, the commission has met 14 times and has drafted state House and Senate district lines during the last three meetings on Aug. 20, Aug. 23 and Aug. 24.

Commission Vice Chair Rebecca Szetela, an Independent from Canton, has chaired meetings when Kellom is absent.

Commission spokesperson Edward Woods said the majority of Kellom’s absences have been due to the medical needs of a family member for whom she is the primary caregiver. Woods said Kellom was expected to be at the commission’s Tuesday meeting, but was involved in a car accident on the way, adding that she was not at fault and was not injured in the collision.

In an emailed statement, Kellom said as the only commissioner who works full time, “I do my best to juggle all my responsibilities effectively, efficiently and ethically.”

“As my fellow commissioners’ attest, I remain open and transparent regarding any unexpected personal and family health challenges and work conflicts, especially against the necessarily evolving MICRC schedule,” Kellom said. “I remain committed and resolute in raising my voice to ensure fair maps through public engagement.”

While Kellom is not the only commissioner who has been absent for official commission business, her number of recorded absences in recent weeks is an outlier. In the same time period, Commissioner Juanita Curry, also a Detroit Democrat, has missed five meetings, Republican Commissioner Erin Wagner of Charlotte has missed four meetings and Republican Rhonda Lange of Reed City has missed three.

Man who plotted to kidnap Gov. Gretchen Whitmer gets 6 years in prison, apologizes to governor

The first person to be sentenced in the plot to kidnap Gov. Gretchen Whitmer over coronavirus restrictions has been ordered to spend six years in prison.

Ty Garbin, 25, in U.S. District Court in Grand Rapids, apologized to Whitmer, her family and his own family before he learned the penalty. Whitmer was not in attendance at the sentencing hearing on Wednesday, Aug. 25.

“I cannot imagine the amount of stress and fear it caused to her family and for that I am truly sorry,” he said.

Related: Gov. Whitmer kidnap subject says he, his family at risk because of his help in FBI investigation

U.S. District Court Judge Robert Jonker sentenced Garbin to 75 months in prison. He also was ordered to spend three years on supervised release after prison and must pay a $2,500 fine.

Garbin, an aircraft mechanic with no previous criminal record, also said he was selfish for not taking into account the trauma his actions would take on his family.

Craig, a Republican who launched an exploratory campaign committee but has yet to formally start his bid for Michigan governor, invited reporters to attend the first meeting of a task force he assembled to create law enforcement policy recommendations. Members of the press, corralled behind a glass wall, were allowed a look inside but denied the opportunity to listen in. Craig took questions after the hour-long meeting in his first press conference since dipping a toe into the gubernatorial race.

“If the president gives me his endorsement, I’ll accept it,” Craig said. “I want to be defined as James Craig, not Donald Trump. I’m looking ahead to 2022.”

The former police chief said he hasn’t seen information proving the 2020 election was stolen, as suggested by Trump and some Republicans who could run alongside Craig on the 2022 ballot. Craig offered a vague answer when asked whether he believes the election outcome was determined by fraud.

Michigan GOP Chairman Ron Weiser will not be criminally charged for using party funds to pay a candidate for secretary of state to drop out of the race in 2018, Michigan Attorney General Dana Nessel announced Monday.

The Michigan Republican Party agreed to pay a $200,000 fine in July after an investigation by the Michigan Department of State found seven payments totaling $200,000 made between August 2018 and February 2019 from the state party’s administrative account to former secretary of state candidate Stan Grot violated the Michigan Campaign Finance Act.

After additional legal analysis, the attorney general determined that because the state party and the SOS were able to reach a conciliation agreement regarding the $200,000 payment, and since Weiser is not a public officer, further criminal action cannot be taken.

The Michigan Republican Party paid a $200,000 fine through a conciliation agreement and since there has been no violation of that agreement, there cannot be additional criminal action, Nessel said. The agreement “acts as a complete bar to any criminal action related to this behavior,” the attorney general wrote.

Republican House Speaker Jason Wentworth called for Michigan’s top unemployment official to be removed from her post Thursday, arguing the agency would benefit from new leadership amid ongoing challenges.

In a press release, Wentworth, R-Farwell, said Gov. Gretchen Whitmer should remove Unemployment Insurance Agency Director Liza Estlund Olson and give the agency a new direction, as the agency’s performance for people trying to collect jobless benefits “just isn’t getting any better.”

“The simple truth is UIA isn’t getting the job done for Michigan families,” Wentworth said, citing the agency’s issues with fraudulent claims, delayed payments to claimants, software issues and an error that resulted in the state paying out claims who claimed jobless benefits for reasons unapproved by the federal government.

“The people of this state need UIA’s help more than ever right now, and instead of rising to the challenge, they are letting us down over and over again,” he continued.

FDA fully approves the Pfizer vaccine for people 16 and older

Even if masks aren’t mandated, parents should send kids to school wearing one, doctors say